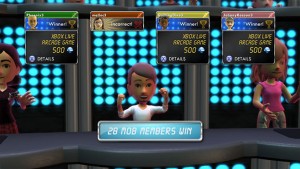 It was announced earlier this week that the online gameshow 1vs.100 was getting canceled and wound not return for a third season. 1vs.100 was a online gameshow across Xbox Live that gave away real prizes, had a very entertaining host (Chris Cashman) and was a great time to play with friends. It’s sad to see such an ambitious project go sour. I can remember countless hours answering questions, just chating with the party I was in, and laughing at people who would loose all the Microsoft points they earned on a simple question.

Poor managment was the “offical” cause for the demise of the game. It was something that seemed ahead of it’s time. It brought together a network of gamers to compete in a large gameshow with nothing to buy, nothing to download (except for the initial download which was very light) just click on the primetime window sit back and enjoy. I would love to see this make a comeback as well as other shows like this. The big three talk about casual gaming and that it is important to the industry, well this was your greatest achievment it that realm. No waggle, no sports games, no shovelware, no controller free motion control could ever touch the potiential this service. For get Price is Right on the Wii what if you could play it with people free of charge and against thousand, with the chance of winning real prizes. This service has great potential and it showed it in 1vs.100 and I for one will sorely miss it.

Any of you ever play it and if so, will you miss it?