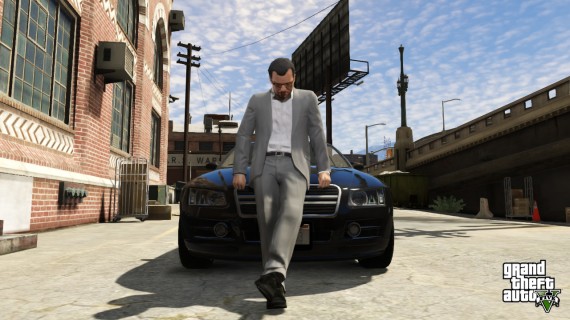 One of the most anticipated titles of the fall, and quite possibly this generation, Grand Theft Auto V has seem to make its way to some consumers a bit early thanks to Amazon. Games Industry International is reporting that some folks that had pre-ordered the title through Amazon, started to receive their copies this weekend. The game will be out in stores tomorrow, with many GameStop’s and other retailers having midnight launches tonight. It sounds like they were trying to ship the game in time for the release and the postal service was on their game rather than lagging behind. While breaking street dates can incur fines, warnings, and bad relations between publishers and retailers, I am not sure if anything will come of this, other than some people getting to enjoy the game a little early. I have been on both the consumer and retail end of broken street dates. When the first Bioshock was about a week from release, the retailer I worked for put it out for sale a week ahead of its release date. There was no giant neon stickers on the shipping box stating the release date and the registers were not prompting not to sell the game before the street date. My store store did sell a few copies and was reprimanded for the infraction. At the time like I am now, I am very versed in the industry and new better and questioned why it happened in the first place, I was off the day they made the mistake. Though that same day I went into the store to purchase Madden Football as well as another title since there was a deal with the purchase of Madden to get another game at 50% off. I had the option to buy Bioshock a week early and get it at a discount, but decided against it. I walked out with Madden, Dead Rising, and a clear conscience. Street dates are in place to make consumers happy, so they all receive the product on the same date, but to also coincide with competition. There are reasons publishers do not release games the same week that a GTA or Call of Duty title are released, they want a return on their investment and to not be buried by the competition. For example, Battlefield 4 will release the end of October and Call of Duty will release the second week in November, those few weeks can mean plenty of sales. This is the same reason we started to see plenty of titles release in the first quarters of new years instead of trying to capitalize on the Christmas rush. Anyway, if you are one of the lucky ones that got your copy early, enjoy. I am pretty sure after this, Rockstar will probably never let it happen again. As for everyone else the game releases tomorrow.