Another Injustice Trailer to Salivate Over

No Comments on Another Injustice Trailer to Salivate Over 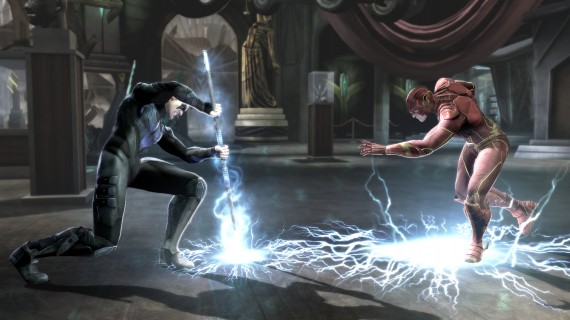 As I continue to post these trailers, it is evident that I am anticipating this game; quite a bit actually. The newest trailer gives some hints at some of the story arcs throughout the game. As much as I loved Gears: Judgment, Bioshock: Infinite, and Tomb Raider; this is easily my most anticipated game of the spring. NetherRealm did such a redeeming effort with Mortal Kombat(2011), I bought the game twice; once on the 360 and most recently on the Vita. If Injustice is packed with the amount of content Mortal Kombat was, if could quite possibly hold me over during the summer gaming drought and then some. I wore out a transforming D-Pad on a 360 controller, and put in ample hours on my arcade stick with Mortal Kombat; just to show how much I played that fighter. If you are at all interested in the DC Universe, Batman, Superman, or just want a fighting game that plays and feels as incredible as Mortal Kombat; check out Injustice. There is a demo available for both the PS3 and Xbox 360. The game will be released on the Wii U, PS3 and 360 on April 16th in the States and April 19th in Europe. Hearing Doomsday tell Superman that he is lives just to kill him, is just spine tingling. 4 more days!