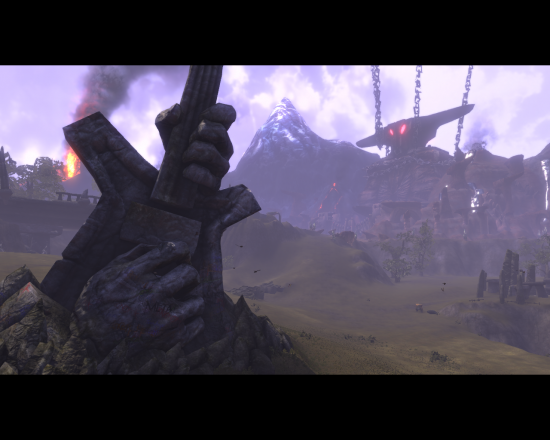 Schafer’s initial vision is roadie Eddie Riggs, dissatisfied with modern metal, being sent to a magical world of a 70’s heavy metal album cover come to life. Eddie’s guitar now summons lightning bolts and can do incredible things through wicked solos. The landscape is littered with giant heavy metal icons, devil horns, hot rod engines, giant stone guitars. Everything old school heavy metal is found in this land, and the inhabitants haven’t the slightest idea about metal. This is where Eddie steps in.

Eddie begins to teach a band of rebels fighting against hair metal oppression how to kick ass and appreciate metal properly. This is done by taking on a relatively small amount of missions found throughout the game’s open world. Brütal Legend generally plays like a standard brawler, if a bit watered down. While it never executes combat to the degree of success as a dedicated God of War clone, it’s not incompetent either. Running around the world or doing the combat-centric missions are functional and fun. The RTS missions are less so.

A third of the way through the game it starts to introduce some light real-time strategy elements into the mix. Again, the gameplay works, but it feels like it’s only half-developed. Nothing’s overtly broken or dysfunctional, it’s simply not very engaging or entertaining past the first few battles. This is worsened by the fact that past the halfway mark the game mimics the war of attrition and territory control that full RTS games have, but without the depth to make it work. Beyond the first few battles, which are exciting and new, the game starts to drag out the strategy encounters well beyond where they’re interesting, and they quickly become an unfortunate series of slogs. They’re never enough to kill the game completely, but it certainly slows down considerably, especially when RTS missions become all there is to the second half of the game. 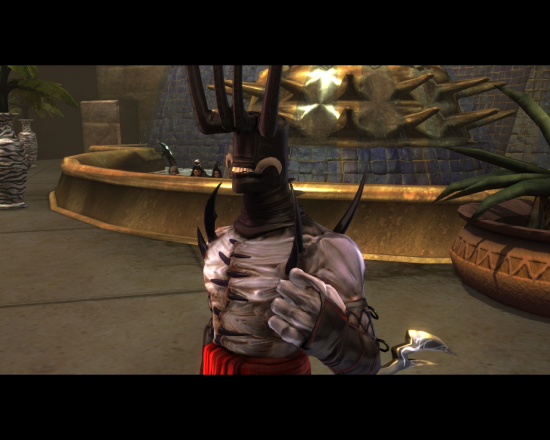 For all the incredibly par gameplay, the game excels beyond compare in its soundtrack. Made up of over seventy of the most metal bands in existence, Tim Schafer hand-picked nearly every track, and it shows from the first one you hear. Not only are most of the songs integral to metal’s history, but the usage of almost every one is spot on. The different factions in the game listen to different artists, and they all fit perfectly for what the faction is. Even better are the slight retoolings of the soundtrack, weaving parts of a song into a level’s introduction before blasting the full thing for the boss fight. Every single time a track is played for you at a certain moment, it fits like a glove, showcasing the game’s already stellar soundtrack with perfect timing and mood. It’s almost a detriment to have an execution so flawless since the game’s other licensed bits fall flat.

It’s really, really cool that Rob Halford, Lita Ford, Ozzy Ozbourne, and Lemmy are all voicing characters heavily based on themselves. Unfortunately, for as much experience as they have crooning on record, they aren’t professional voice actors, and it shows in every line. It’s excusable in the fact that they’re essentially playing themselves, but it also sounds unconvincing, even if Lemmy is Lemmy. It’s made even more plain when it’s side-by-side with professional voice work from actual voice actors, including Jack Black. The best out of the group is Ozzy since he plays a 4th-wall shattering Guardian of Metal, but it’s still clear that he’s out of his element. All told, it’s hard to dock the game for these shortcomings simply because Brütal Legend has metal legends contributing themselves to the whole project, furthering the sincerity of the whole package. 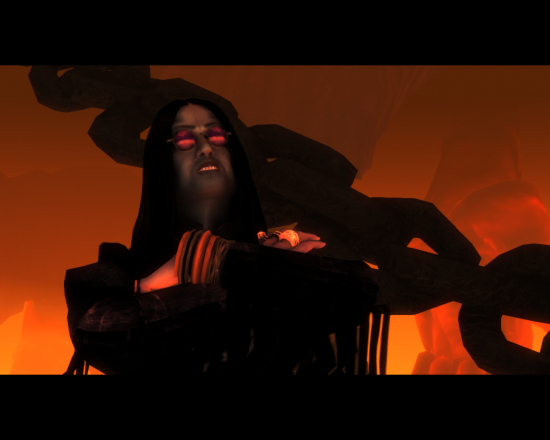 The only real shortcoming of note in the presentation is the fact that this is an Xbox 360/Playstation 3 title from 2009, and it easily looks the part. Character models are relatively low in quality, and the animations look cartoony, which was likely the point, but it doesn’t make up for the antiquated visuals. The PC version has a higher resolution and as much anti-aliasing and anisotropic filtering as you can pour on it, but it never changes how incredibly dated the game looks. It runs fairly well, although it had some hitching during the majority of the open world gameplay, and it had a bizarre graphical anomaly in one section of the map. The controls also made the jump fairly well, although it easily handles better with a controller than a mouse and keyboard. If ever the question came up, I would undoubtedly recommend the former.

A wall of sound becomes a wall of corrupted polys...

For what it is, a 2009 360/PS3 title about a magical journey to the land of metal, for metalheads and by metalheads, Brütal Legend is beyond compare. That’s mostly because it’s alone in its field, but also partly due to the fact that, despite some slogs in the RTS department, and two halves of unfinished gameplay combined to create a whole, it does its unique gameplay with gusto and bravado, and no small amount of success. It’s a little difficult to recommend at the full $20 price tag unless you completely missed the initial console release, but if it ever drops to about half price it’s easily worth that much of your time.