Classic Gaming, Dune II: The Building of a Dynasty

1 Comment on Classic Gaming, Dune II: The Building of a Dynasty

In 1992 Dune II: The Building of a Dynasty was released by developer Westwood Studios through Virgin Interactive and while it may have not been the first Real Time Strategy game. It was certainly the most influential laying the ground-work for such games like Command & Conquer, Warcraft, Age of Empires, and Starcraft. 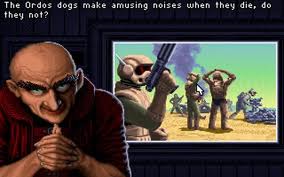 Dune II based on the Sci-Fi classic movie Dune (not based on the books by Frank Herbert). The game has you take one of three houses: the evil Harkonnen, the good Atreides or the deceivingOrdos. Once you choose your house your mission is explained to you by your houses’ Mentat and then you go off the mine Spice, the most desired substance in the entire known galaxy. It may sound simple but there are many things that stand in the way of total control of the planet. You must be on guard because the other houses are vying for control as well. Manage you resources wisely and be sure that you’re be able to fend off the other houses as well as protect you harvesters against the giant Sand Worms that will attack any thing that touches the sands in the desert. If you succeed then your house will be the most powerful in all the galaxy and be able to challenge even the Emperor for his throne.

The interface is rather clunky and the commands are all menu driven but once you take into affect that this game is 20 years old AND pretty much the first game of its kind. It game will hook you and before long, 6 hours of your life is gone and you only desire to command your forces in your campaign for control of Arrakis the desert planet. So if you’re a fan of RTS’ then you should pay homage to the game that started it all! Here’s some video to whet your apatite give it a look!

So if I’ve intrigued you about Dune II: The Building of a Dynasty then you’ll be happy to know  it’s free to play on line in all it’s classic glory! Click on the picture of the houses to play now!