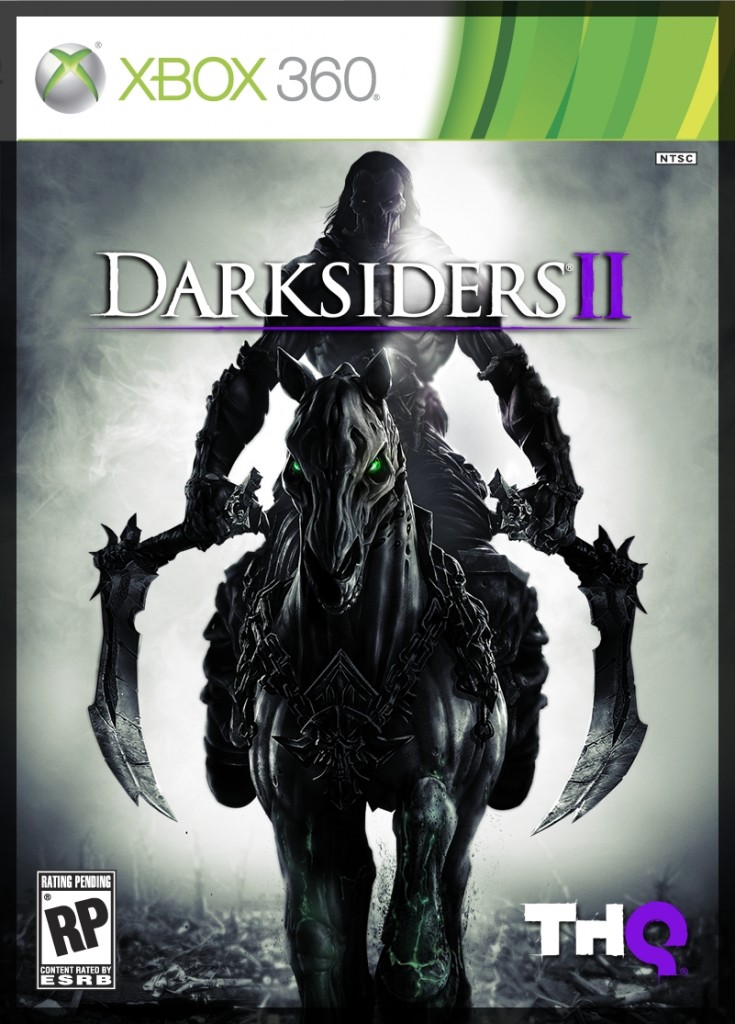 In 2010 an unknown developer, Vigil Games, released a game that a jack of all trades and master of none. The original Darksiders was a mix mash of popular game mechanics inside a Zelda like shell, with an awesome take on the apocalypse. The mechanics it did use fit well together, even if it was a bit obvious where they came from, and was met with positive reviews. In Darksiders, you took on the roll of War, one of the Four Horsemen of Apocalypse. As War, you were trying to clear your name for starting the war between Heaven and Hell before the 7th seal was broken. Now in Darksiders 2, you control Death, War’s fellow brethren of the apocalypse, on a quest to help clear his brother’s name and restore humanity. Darksiders 2 feels familiar but is a beast of its own; bigger, deeper mechanics and a vast improvement over its predecessor.

This has been the journey so far

Death’s journey starts right after the opening tutorial in the first Darksiders. War has been imprisoned for 100 by the Charred Counsel for starting the apocalypse a bit prematurely and so Death takes it upon himself to help his brother and restore humanity. Death’s journey is great if not a little convoluted. Death starts by seeking out the keep of secrets also known as the Crowfather. During the first encounter with Crowfather we learn of the Horsemen’s past and that they are of a special race known as the Nephilim, a cross between angels and demons. The Four Horsemen slaughtered the rest of their kind in exchanged for powers, imbued by the Charred Counsel to keep the balance in the Universe. Death’s amulet holds the souls of his fellow kinsmen and in the battle with Crowfather it is broken and embedded into Death’s chest as a mark of shame, a reminder if you will. After the thrilling start, Death learns he must find the tree of life and on this journey he visits the Forge Lands. The Forge Lands are where the Makers call home. The Makers are responsible for creation and have a wee bit of a Scottish accent. The Forge Lands serve as one of the hub maps with dungeons strewed through it. The Forge Lands alone are about the size of the entire map from the first game. During the time in Forge Lands you learn that this realm has been over taken by corruption. Corruption takes the form as the main protagonist in Deaths story. The corruption takes the form of Absalom, a Nephilim that was betrayed and slaughtered by Death. At this point the story takes a turn for the personal and has Death not only trying to save humanity but him as well. The story and progression does a get a little repetitive with the dreaded 3 point quest throughout the game. You later visit the Land of the Dead, which is just as large as the Forge Lands, but in order to progress you must fight their champion which requires 3 larges stones to collect. Then you must face and collected the 3 hands of the Lord of Bones and you can kind of see where this is going. The fetch quest normally run in threes, while it elongates the game it can see tedious as well; though it must be noted that each dungeon of the three are all unique in their own right. There are two more maps that are not nearly as large as the others but serve their purpose well. There is one particular dungeon or quest I had a problem with that felt out of place and broke the flow of the game. After the Land of the Dead you will travel to Lostlight in search of a key, while you are there you will be transported to Earth for one of the fetch quest. This mission and dungeon just felt like they didn’t belong and really did nothing for the story and hampered the gameplay department as well. I will elaborate on the gameplay problem later in the review. I did enjoy the story however, there were points that really didn’t fit or felt like they could have been skipped. The corruption, as different as a villain it was, it stemmed from nowhere. There were characters that just seemed like filler. I must note that Death is a fantastic anti-hero, voiced wonderfully by Michael Wincott. He borders the line between compassionate and crass, while he has no patients for anyone on his quest, he does feel for the salvation of his brother and is tormented by his past sins. The Makers are other lot that I cared for and wanted to see a good outcome for them. Elder Eideard is voiced by James Cosmo (Lord Commander of the Night’s Watch in the superb Game of Thrones) and Pup, a young maker with faults was the most memorable. The story does wrap up nicely but ends up right were the first one ended which has me intrigued to how they are going to play off the inventible third installment (you know there will be third as long as THQ survives).

One of my biggest complaints with the first title was the combat got repetitive, you had one sword and a few different sub-weapons at your disposal but it never really got off the ground. This time around the game plays more like Diablo or Baulders Gate, damage numbers pop out of enemies and there are loot drops, wonderful loot drops. Death wields his signature scythes but has a variety of sub-weapons and armors that can be found or purchased at vendors. There are new scythes to be had each one with its own stats and esthetics and the sub-weapons range from gauntlets and claws to hammers and swords again with individual stats and appearances. Death’s armor is interchangeable with gauntlets, boots, armor, cowls, and shoulder pieces that make him look less like a walking trashcan ala War. There are two different types of armor as well, ones that will boost defense and strength and ones that will boost wrath and affect the things you cast. This leads to the new leveling system. For every baddie you kill you are awarded experience and wrath, wrath held over from the last game used to cast, and you will level gaining skill points as you go. The stat trees are broken into two groups one that build toward melee and one that builds towards casting. You have the option to head down either path or cross trees and do a little of both.  The armor you choose will effect what tree you go down, but only to a varying degree. I went down the casting path and used the heavier armor that boosted my health and strength. I was raising explosives pawns that drew enemies away while using larger sub-weapons while tanking in the middle of the chaos. Death has a chaos form as well; War had one in the first. The meter fills with every successful hit and when activated last for a limited time. This form can be leveled as well though there are no choices along with this form. Once you hit the max level an energy blast follows its deactivation. The combat never tired as I was always trying out new powers and weapons and trying to find the right balance of armor to compensate my attack tactics. Death is faster and less bulky than War and it shows in his movement and platforming. The platforming feels right out of the Prince of Persia Remake of 2008. Death can run on walls, run up walls, grapple on the ledges, and vault over small stubs that continue his climb. As with the first game using many popular game mechanics with varying results, the platforming is fantastic. The only complaint I have with it is using the left trigger to leap backwards; I wish it would have faster respond time as with some of the platforming has time restraints in some areas i.e. get to a door before it closes. Death does not go alone on his quest. This time around Despair, Death’s horse, is available from the get go. This change is a much needed welcome, the first game had a lot of back tracking and the horse was available a little over halfway through the game which made trekking a chore. Dust, Death’s raven is there as well glowing green and showing the way to objectives. Fast traveling has also been greatly improved. You can now fast travel from waypoint to waypoint on the world map without talking to Vulgrim. It becomes increasingly useful during dungeons when you’re loaded up with loot or need other health potion before you face a boss. The grapple hook makes a return in a new form as well as the Voidwalker (the portal gun from Portal) though it no longer shoots blue and orange portals, they are just blue now. There is one mechanic that I thought was a really great touch, the Voidwalker gets an upgrade that creates a portal through time. It only works in one dungeon but the dungeon is very well designed as are the puzzles wrapped around this mechanic.

Death is never the end

With all this great stuff going for it Darksiders 2 does has its faults. The engine is beginning to show its age, some of the textures are downright ugly while some look fantastic despite the amazing art style. There are sprawling area’s and the set pieces and bosses can be huge and it all runs well with no frame rate issues that I encountered though there was one time the game crashed on me and I had to reboot my console and start from my last autosave. The third chapter is a little lacking compared to the first two, despite it being two maps there isn’t anything to explore other than the dungeons and as before the one dungeon felt out of place and gameplay breaking. When you hit that dungeon you will know what I am talking about. While the ending is satisfying there is no indication that you have reached the final boss and he is a little underwhelming. Once I got to where the final boss was going to take place I thought the game was going to continue the credits were a real surprise. Though despite these little gripes the game is fantastic, they fixed a lot that was wrong with the first and despite still using popular game mechanics from other games; this one feels more of its own. The maps are worth exploring and the Land of the Dead is a visual splendor. Voice acting for the most part is top notch and would welcome Michael Wincott back as Death in a sequel. Now the question is who we will see in the sequel, we have been War and we have been Death, will Strife or Fury take center stage? We will have to wait but on a closing note I would like to see a sequel with the same art style on more powerful next gen hardware.

+ The game is HUGE, plenty of side quest to keep you busy.

+Combat has more variety and does not tire

+Fantastic soundtrack and voice acting (most of the time)

+/- Good Story even if some of it doesn’t make sense.

+/- Most of the game is gorgeous there are some muddy textures here and there.

– Game crashed and locked up console