DC Universe gets a title update and adds Aquaman content 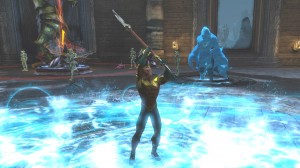 Ok before I hear the entire world snickering and pours on the hate for Aquaman, read the New 52 Justice League; I’ll admit he is pretty cool in that series. Secondly, yes, there are still people playing this game and I happen to like it very much if you’re new to the site. Anyway, with the title update there will be specific content and quest to help or go against Aquaman. The battle will take place on the Metropolis side and will be available to any one level 5 or higher. Check the news release for all the details.

“Summer is heating up in DC Universe Online, and only you can cool it down! War is brewing in the world beneath the waves. Aquaman, King of Atlantis, is battling his traitorous brother, Ocean Master, for the right to rule.

Now, the Atlantean civil war has exploded. Intense fighting has breached the waves and spilled over into the surface world. Loyal Atlanteans and Mutineers have brought ships and battle to the waters between Little Bohemia and Metropolis, and both will need your help if they are to win victory. Who will prevail?

Join us for the ALL NEW Summer Seasonal event, Tides of War!

Dive down and assist either Aquaman or Ocean Master in a fierce boss battle in the Atlantean Warpost!

This 4-person alert is open to Heroes and Villains level 5 and higher.

Join the fight in the waters between Metropolis and Little Bohemia!

Assist the Atlanteans or the Mutineers, and take down the enemy ships!

Seek out new Feats and Collections!”

Sounds cool and once I am downloading the assets off the forever slow servers, I’ll update with an impression. DCU is free to play on the PC and PS3 and this update will be free as well but like in the release it will be only for a limited time. Oh and this is a total plug, you’re welcome DC, pick up the New 52 Justice League while you’re at it, book #11 came out today and I am in love with the series. Plus, it’s written by Geoff Johns and the art is by Jim Lee, Enjoy.

If anyone does play, I play on the PS3 and my handle is CABXYZ. Oh, I do have a League, the League of Super Buddies. You know it’s awesome!