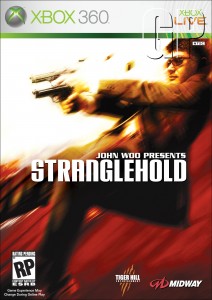 With the recent release of Max Payne 3, bullet time is back in the spot light; though some may not be at an opportunity to pick the game up due to family vacations, summer college courses, and real life getting in the way of precious gaming time. Well, I dove into the dump bin and pulled out one of my favorite games from 2007 that emulates the 3rd person, bullet time action of the Max Payne series with surprising results and is light on the price tag. Enter Stranglehold, a Hong Kong action film disguised as a game that is fueled by Mr. Bullet time himself, John Woo. Stranglehold was a sequel of sorts to John Woo’s Hard Boiled. You played detective Tequila, modeled and voiced by Chun Yun-fat as he tracks down a cop killer and dispenses justice with his two “friends”. Tequila goes through various locations, from a market, to a penthouse, to a shanty drug town dispersing gangs and crime syndicates with a symphony of bullets and explosions. This is where the games magic comes through; watching the carnage you bring to life in glorious slow-mo is like nothing else. Yes, Max Payne did bullet time first, but Hard Boiled was the inspiration for the gun play in Max Payne series. Max Payne does do story telling better by leaps and bounds, but Strangleholds concerto of slow motion, bullets, and explosions holds its own in the game play department. Speaking of explosions, the games levels has destructive elements that would make Michael Bay happy. The game is a little on the short side you could fly through it on an easy difficulty over a weekend but replaying the game finding new ways to take out enemies is great fun. I found the game at my local GameStop, used with a perfect case for $3.99! The game runs new for around $12.99, but even at that price it’s a steal. There is a demo available on XBL and the PSN so you can at least give it a try. If you don’t have the funds to grab up Max Payne 3 (which is fantastic I might add), Stranglehold is a great alternative.

+ Great game play that holds strong though out the game

+ It really feels like a John Woo action flick

+ Destructible environments that is impressive even to this day

+ A cavalcade of great looking explosions

– The game is a little on the short side

– Unreal 3 can rear its ugly head with texture pop-in

– There is a multiplayer mode, but no one plays it anymore

Verdict: Cheaper than a movie ticket and better than most of what’s out in theaters.

Reply to The MesanoicCancel reply