Gaming in Stereo: The Sounds of an Assassin

2 Comments on Gaming in Stereo: The Sounds of an Assassin 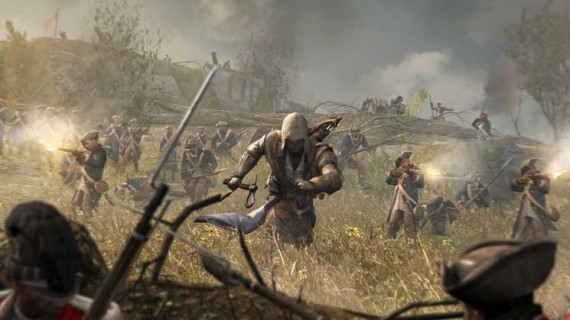 To be quite honest, I was never sold on Assassin’s Creed 3. I never cared much for the time period, I still want Victorian London. I really don’t care for American history. It’s dreadfully boring; full of terroristic acts; forcing the Native Americans from their homes; and full of questionable “heroes”. Until 3, I have much love for the series. Even the lesser titles like Revelations, I played till completion, and enjoyed my time with them. I hardly heard good things said about the main protagonist, Connor Kenway. Jesper Kyd, one of my favorite composers, was not returning to score the third entry. I did, however, wanted to see how the current Desmond story arc finished so when I found the game for a good price, I picked it up recently.

After sinking well over 25 hours into it and have still not completed the main story line, my attitude towards the game has dramatically changed; I still loathe American history though. Despite being set in the American Revolution, the time period in itself is intriguing. The story between the Templars and Assassins during the time period is the most intriguing of the series. Connor is the son of Haytham Kenway, a British Templar and Kaniehti:io a Native American. He falls into the Assassins by way of a village elder and under the guidance of Achilles Davenport, a retired assassin, becomes an assassin himself. Connor took some time to get used to. Connor is not the suave, charismatic hero that Ezio was. Connor is brash, angry, and headstrong. Orphaned as a small boy; never really fitting in since he was of two worlds; finding and meeting his father to find out he is the enemy; constantly being manipulated by his father and revolutionaries; this all could be a bit much. I feel it all came together to give me a proper feel for this character; he is tragic. I never felt bad for the other assassins in the franchise despite some of them seeing hardship, though Connor I feel for. After putting all this time into the game and hearing what Lorne Balfe did with the soundtrack; this is becoming one of my favorites in the series. Lorne Balfe did contribute to the Assassin’s Creed: Revelations soundtrack as well as helping Hans Zimmer on several game and movie soundtracks.

I finally sat at the main screen long enough the other night to experience this full song, and I instantly bought it. Though parts of the theme, and the Variation below, can be heard throughout the game. The theme is epic; ranging from modern sounds in the beginning, to the lower brass featuring the main theme, and at (1:00) giving way for the main thoroughfare to break through. The song feels heroic, yet tragic; As with Connor. I really wish I would have given this game and soundtrack time last year, this song could have easily broken my top five list.

This variation on the main theme plays throughout the game when finishing missions or one of Connors plot points are finished. I love the single violin at the beginning and the constant drumbeat are reminiscent of other tracks that can be heard throughout the cities and is very fitting for the time period. It’s not a long variation but the main theme’s from the original are carried over, with the theatrics toned down a bit. I am really happy with what Mr. Balfe did with the soundtrack.

With the upcoming Assassin’s Creed IV: Black Flag due out this fall, I am not tired of this yearly release. I am interested though, since it will be a prequel and feature Edward Kenway, Connors grandfather, will we ever see Connor again. Ezio had three games, Altair was in one and parts of Revelations. If not, it has been a great journey playing as Ratonhnhaké:ton (Connors proper name) and experiencing this unique, if not widely appreciated character.