No Comments on Goblin Keeper: Total World Domination Anyone?

“The road may be long, and the dangers may be great, but the reward is well worth it… the title of greatest Goblin Keeper of all time!” Goblin Keeper Game Guide 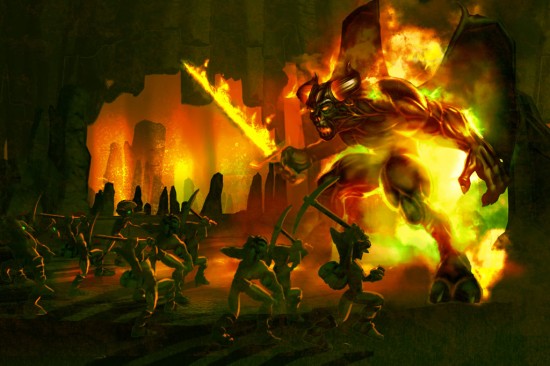 Looking for something to play in your downtime or lunchbreak, why not try out the new free-to-play online game from Night Owl Games called Goblin Keeper. I can only describe it as a strange combination of The Sims, Lemmings and Farmville – be careful it’s strangely addictive.

You are an evil overlord and the aim of the game is total world domination! You achieve this lofty goal by building an army of goblins, orcs, warlocks and other creatures forming your very own empire. All you have to do is keep your army happy with food and gold and get them to build for you as needed, dens for sleeping, mines for resources such as gold, iron and crystal and a library for research among other things – the more they learn the more you are able to achieve for your dungeon, more workers, more space and more powerful creatures. The game has it’s own shop, similar to GW2 but of course on a smaller scale, where you can buy things such as upgrades, boosts, and recipes, or you can trade with other players. All this empire building eventually means that you are able to send out your army on raids to villages or keeps, in turn you need to defend your dungeon from other raiding parties. It has all the right elements, levelling, PvP, PvE, crafting, and it also a really good method of introducing you to the game without resorting to the usual tutorial routines, you are gradually introduced to the elements of the game and suddenly you are playing on your own and relying less on the help tips.

Here’s a quick rundown of the game features:

– Dungeon: Build your dungeons according to your imagination.
– Crafting: When your rooms are created, use the workshop to improve them with equipment and furniture.
– Tactics: Develop various tactics to defend your dungeon and to fight back raids.
– PvP: Relaxing belongs to history: face other players in battle, loot their dungeons and eliminate their creatures.
– PvE: Down with the elves! Destroy and loot the homes of these pointy-ears on your overworld raids.

To see more check out the game trailer available on the Goblin Keeper website: http://en.goblinkeeper.com/media.