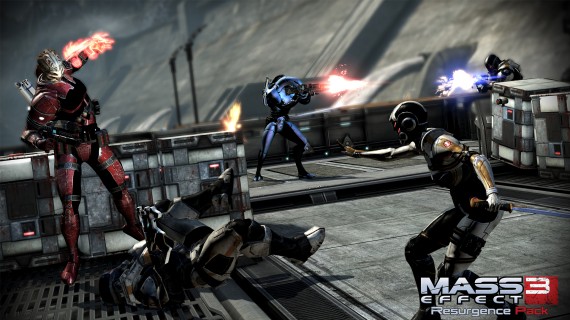 Mass Effect 3 shouldn’t have multiplayer, and it shouldn’t work. I am a big advocate of not shoving multiplayer in titles were it does not belong. Bioshock 2 and Tomb Raider are two more recent titles that are good examples of this. They provide great single player content and have tacked on multiplayer to try and grab the attention of the crowd that has to have multiplayer in everything. When Mas Effect 3’s multiplayer was announced a couple of years ago, I remember my reaction, I didn’t want anything to do with it. The previous games had such a strong focus on the single player aspect culminating in dozens of hours of spectacular space opera content, how dare they put some half baked multiplayer in my Mass Effect, turns out it was for the better. Mass Effect 3’s multiplayer is different. You have yourself and 3 teammates taking on hordes enemies, while accomplishing objectives on various waves. Teamwork is essential, and going off on your own can cause a mission failure. Ironically, the multiplayer is nothing more than single players combat sections with friends and it works. It works so well that after 161 hours pumped into the multiplayer, and even leaving it for a few months, I am back and addicted to it more than ever. Typically it has been my youngest brother, Joe (ScrotusKilmystr), and myself undertaking missions and improving our challenges and N7 rankings late into the weekend nights. The reason I am addicted to the multiplayer versus more popular outings is the teamwork that is involved. Loving the series, the aesthetics, the tech/biotic powers, different alien races, weapons, music, the enemies, and customization is just icing to the team play cake. I am not one for numbers, Kill/Death ratios in other games annoy me, and I find it a poor way to rank anyone’s talent. I look at overall scores in ME3’s post round report to decide if my current load-out is working, where I need to put more skill points into, and what equipment I set before each match so that I can be more helpful to my teammates. I want to finish personal challenges, earn more credits so I can buy more unlock packs in the store, and earn more full extractions; the only way to do that is teamwork.

Outside of the teamwork perspective, the sheer amount of content that the multiplayer has is ridiculous, and it is all included. 5 DLC packs included new maps, re-imagined maps, weapons, enemies, difficulty settings, equipment, and multiplayer characters; but the best part it was all free. 161 hours in and I am still missing a few characters, weapons and equipment. Most publishers charge you about $6o for all the content that was added to Mass Effect 3’s multiplayer. There were balancing passes made as well, making it one of the best multiplayer gaming experiences of this generation of consoles. Though support for this title ended in May, around the same time I took a break from it, there is still a strong community of player still out there. The game retails for under $20 and all the DLC is still free, so their is no excuse not to fire it up and give it a try. If you do jump in and give it a try or already play, you can check out all your stat info and unlocks right here at the N7 HQ.