Independence Day Weekend: What to Play….

News, Article of the week, Games 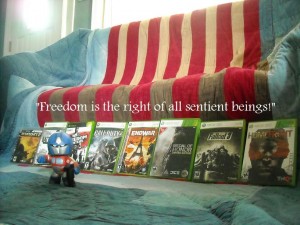 Every July 4th, we Americans celebrate our independence and victory over the English with cook outs, beer, and satanic nature in all of us to blow ourselves up with purdy lights. If you are antisocial, hate grilled food, detest beer, or are Atomosophobic, then we have a list of games that can feed your patriotism and need to blow shit up without the likely hood of losing any appendages.

Rambo Arcade (arcade) – this particular title may be new to some, it was to me be before stepping into the local Dave & Buster’s, but man does it scream “America F@#K Yea!” It is a light gun game in the same vein as Time Crisis but replace the vibrating over sized pistols with large vibrating machine guns. A Sega published title, this game hit the American arcades in 2009. The game is all about John Rambo and unloading as many clips as possible into everything that looks like it could be living all while things go boom. At the end of the day you will be deaf, satisfied, and wearing an American flag like Rocky Balboa.

Call of Duty (any in the series, various platforms) – The series has gone from World War 2 to modern day and most recently back in time (queue Huey Lewis) to the Cold War. While the older titles had a more of a story telling approach, the current iterations are more bombastic than a Michael Bay summer movie. No matter which in the series you pick you will be thrown at some point into the shoes of an American soldier either fighting Nazis, the Japanese, some brown people, and the constant struggle to figure out what the hell is going on amongst the hail fire of explosions. Not camping out this weekend? Well set up your pop tent in the multiplayer where you can spend an entire match in one corner just so you have your perfect K/D spread (boredom may occur, bug bites not included).

Medal of Honor (Xbox 360, PS3, PC) – Panned by some critics but loved by this one, the reinvention of Medal of Honor series takes a modern day approach and tells the story of Tier 1 operatives in Afghanistan. The story is very “brothers in arms” has some of the best sniper missions this side of Silent Scope, and has one mission in particular that you will learn to appreciate every little brick that holds a shanty house together. The multiplayer is decent with the standard fare of game modes and unlocks including a Battlefield type mode called combat mission and beards for you man at arms. Despite the multiplayer being built by DICE, there is no destruction 2.0 and stray bullets follow you around corners (results may vary, breaking controller is not a solution, please contact your local DICE employee for the game still has yet to receive a title update).

HomeFront (Xbox 360, PS3, PC) – Set in the near future, America becomes the battle ground for the United Korean invasion. You play as a resistance fighter that takes one hell of a horrific ride in the opening chapter, and join a bunch of rag tag Americans that include your typical people; the retired African American cop, a female, a young Asian male that gets stereotyped throughout the game, and a military man that says f^%k way too much, you’ll get f#%king sick and tired of this f%#king asshole by the second mission. The game carries a sense of dread throughout carrying over into the ugly texture work and the sight of $20 a gallon on gas station signs (try filling you Hummer or Stump Jumper with prices like that, HA!). The multiplayer (after a rough first week) runs smooth and is capable of some real fun in the Ground Control game modes, standard FPS unlocks abound and you can score some sweet pink gun camo (I <3 my gun) if you stick it out to reach level 75.

Freedom Fighters (PS2, Xbox, GameCube, PC) – Before the Korean invasion in HomeFront; the Russians invaded New York City in Freedom Fighters. A surprise hit of the last generation, Freedom Fighters cast you in the role of a plumber turn resistance fighter trying to destroy the Russian occupation of the Big Apple. A third person shooter with squad controls, the game took you all over the city that never sleeps shooting the big red in fight for our pizza, hotdog stands and imitation Oakley sunglasses. The multiplayer was blast and kept the same squad of A.I. bots at your side, it made for some intense fire fights and some over the top rag-doll deaths. In all seriousness, despite the holiday you should hunt this game down and play it, it is one of IO interactive best and will make you forget about the pile of crap they call Kane and Lynch.

Anything with Tom Clancy’s name on it (platforms vary) – Rainbow Six, Ghost Recon, Splinter Cell, Hawx, and End War all fighting as Americans and are all killing and blowing something up in one way or another. The series of Tom Clancy games have been the smart shooters. There are always tactics to take into effect, you plan missions, plan your shots, and are not seen as gung ho gun toting shit heads. Take your bug spray on these missions as you are always seen outside the U.S., though there are some that have set pieces in the U.S. such as America’s playground Las Vegas, you’ll visit lush jungles, and embassies of all different nations. Whether you are stopping Mexican terrorist in GRAW 1&2 or a Mexican (terrorist of course) invasion in Rainbow Six: Vegas or preventing World War 3 from breaking out over Paris in End War you will have plenty to salute your special forces over (though some may experience anger or betrayal in Splinter Cell: Conviction due to the “writing on the wall”).

Battlefield series (various platforms) – Debuting on the PC this series has always been huge. Huge maps, huge number of players, huge selection of weaponry, huge explosions, and huge destructibility as of late. DICE has made the defacto team objective based shooter. From WW2 to 2142 the destruction and fun continue on. A huge PC fan base as well as a loyal console base the games have thrived and come to a glorious second coming known as the Frostbite engine. Being shot at and need a door quickly? Shoot a grenade and presto! The garage door is stuck and you can’t park your tank? Just shoot it! Pesky sniper being a bitch and whiffing you from a building? Bring the motherf$3ker down on top of him! Everything is curable with Frostbite! Warning: this game can be seriously addicting and bring much joy. Not everything is destructible, buildings vary by size, small trailers will not crumble, and not all explosives are created equal, play the Battlefield Bad Company series for details.

Fallout 3 (Xbox 360, PS3, PC) – Nothing says patriotism like pointing the loaded end of your Fat Boy at a pissed off Uber Mutant in defense of the D.C. wasteland. Ever wonder what our beloved capital would look like if we ever pissed off the wrong people look no further. You’re a vault escapee, trying to resurrect project purity in hopes of bringing life and prosperity back to what remains of Washington D.C. Despite being leveled by a nuke, there is plenty of iconic American imagery including the capital building, Jefferson Memorial, and the Washington Memorial despite some dilapidation. Bring up your PIP Boy and set your destination for a fantastic ride complete with nuclear fireworks! (Warning: Megaton will advise you not to blow them up for your own enjoyment, consequences may vary. Uber Mutant shopping cart armor sold separately.)

Resistance 2 – We defended this land 235 years ago from the British and tyranny, now defend it from extinction and alien scumbags! During the first Resistance you fought the Chimera overseas on British soil, now they are pissed and are invading the U.S. of A. Set in 1953, you take the role as Nathan Hale, strapping lad from the first game yet slightly infected with the chimeran virus, as he is battles these yellow eyed assholes from my beautiful birth state of California to Idaho, to Chicago, to Louisiana and the gulf shore. Suit up, gun up, and man up as your about to step knee deep into alien dookie fighting for our survival and what is left of this beautiful country. Celebrate our independence by spewing fireworks out of chimeran ships and repel a alien invasion that would make Roland Emmerich jealous (plus it has a hell of a lot less of Will Smith and his 90’s centric quips “Get Jiggy with it!”).

If you can’t find something patriotic to play here and just want the fun of fireworks without the potential to blowing yourself up, there are two fire retardant games for you (note: the actual disc and case are not fire retardant, neither is a console or PC, we do not assume responsibility if you are a jack ass and light one of these games on fire).

FantaVision (PS2) – One of the original launch games for the PS2, a color matching game with some flare, literally. This game will have you making creative firework displays without the hassle of a permit. If you can find and translate the Japanese version of the game it has a Techno soundtrack by Soichi Terada, though the American version does have techno, there are no licensed songs.

Boom Boom Rocket (XBLA) – One of the first rhythm games for the Live Arcade, this Bizarre Creations developed game (May they be remembered), was the couch warriors DDR. Imagine DDR controlled with a standard controller and fireworks detonating to the beat and you have Boom Boom Rocket. The sound track is re-imagined classical tunes with a techno beat and creating a visual spectacle takes no more effort than moving your right thumb. So if you are stuffed from forcing down hotdogs and beer all weekend and are too lazy to get up off the couch, you can enjoy the glorious light show of launching cylinders of exploding chemicals into the air from the comfort of where you lay.

I hope everyone has a good holiday weekend full of food, alcoholic beverages, family, and fun filled explosions (controlled ones of course), but above all else games! I hope you all get a good chuckle out of this article as it was a blast to write; from all of us here at the TheGamersBlog, Happy Independence Day (ID4).