Inside the voices of Batman: Arkham City

9 Comments on Inside the voices of Batman: Arkham City 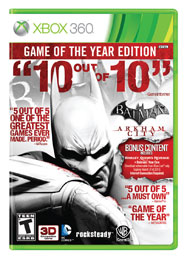 Rocksteady has released an inside look at the voice overs for Batman: Arkham City. The game is getting a Game of the Year Edition and this video is to coincide with that release. The Game of the Year edition is to be released this coming Tuesday in North America and will include the the core game plus all the DLC that has been released including a new piece of DLC centering around Harley Quinn. Now the box art has some huge issues, not with the art itself, but the all the accolades around it. It’s just plain hideous. The video below is impressive as we get to see Mark Hamill take to the recording studio in what would be his last performance as the Joker. To see him and Kevin Conroy do their lines back and forth brings a tears to the eyes. I grew up with Batman: The animated series, to me there is no one else that can take their spots as these characters in the animated realm, so getting to see this video was a real treat for me. I reviewed the game last year and it received a perfect score and I still stand by that score, the game is the perfect Batman experience. With Uncharted 2, Naughty Dog set their bar for a sequel incredibly high, as did Rocksteady with Arkham City. I have faith in Rocksteady to bring us a sequel, though unannounced but come on you know it’s being developed, that will rival Arkham City’s greatness. Enjoy the video and if have yet to play the game, you owe it to yourself to do so.