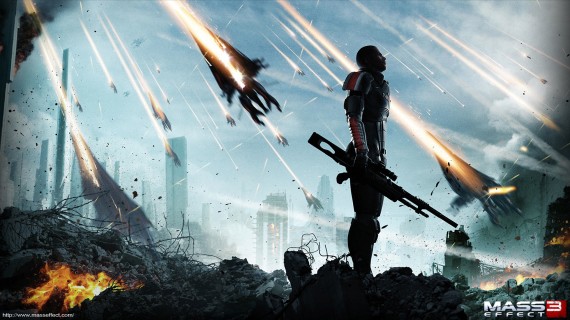 Some of the best trailers and videos come from the Sci-Fi genre, don’t really know why that is, it just happens. These next three trailers are some of our favorites of this past generation. The Halo series never really jumped on the pre-rendered band wagon, until Halo Wars, a RTS spin off developed by the now defunct Ensemble Studios. Halo 4 picked back up on these, and take them to a unprecedented level, in terms of production values. The “Take earth back” trailer for Mass Effect 3, is by far one of the most dramatic and heartfelt trailers in any medium. I was tortured at work when this game was released because the original cut of this trailer played over and over again, and I couldn’t get my copy until my shift was finished.  Mass Effect and Halo have been this generations Star Wars and Star Trek, two series with great fans and great games. Enjoy!

This cut scene is closer to the end of the single player campaign, but is by and far the best scene to come out of this touted console RTS. Halo Wars takes place around 20 years before the events of Halo: Combat Evolved, Halo Wars shows the original Spartans in their prime. During the video we see Sergeant Forge taking out the Arbiter, and three Spartans doling out the pain to a wave of Elites. This is one of Joe and I’s favorite videos from this game and you can see why.

Halo 4 has typical in-engine scenes, but they also went the extra mile and put full pre-rendered intro, outro, and all of the scenes for Spartan Ops. They look fantastic and the intro dives deep into Halo lore and what makes a Spartan a Spartan. Dr. Halsey, the creator of the Spartan program and Cortana, is the one being question by ONI as they search for a way to implement the Spartan 2 program. From the video you can get a sense of why Master Chief (John) is inherently broken emotionally and how the great Sci-Fi novel Ender’s Game is comparable. Enjoy this fantastic opening.

This trailer maybe my favorite trailer of all time, regardless of medium. The Mass Effect trilogy has been a huge success this generation and pushed story telling and continuation in games, to a new level. This trailer is just as devastating as it is hopeful. Seeing the destruction the Reapers caused in a matter of minutes is heart wrenching. The saddest part is watching Shepard pick up the toy where the child and sunflower field use to be. Watching Shepard then take the fight to the reapers is inspiring and seeing the Normandy swoop in brings a sense of hope and unity. There are two versions below, one featuring male Shepard, the other female Shepard. Both version have Ashley standing beside Shepard as they reach Earth. Enjoy one of my favorite trailers ever.