The first time I heard about Legend of Grimrock was a news post on a gaming blog featuring a very early trailer showering only three or four enemies and some simple gameplay. I rather quickly forgot about it for a month until it crossed my mind and I conducted a desperate Google search to find it. After stumbling on its site I saw the progress developers Almost Human Games had made and was instantly convinced to pre-order. A few months later Grimrock has firmly hit digital shelves, but have I been justified in my excitement over this old-school dungeon-crawler? 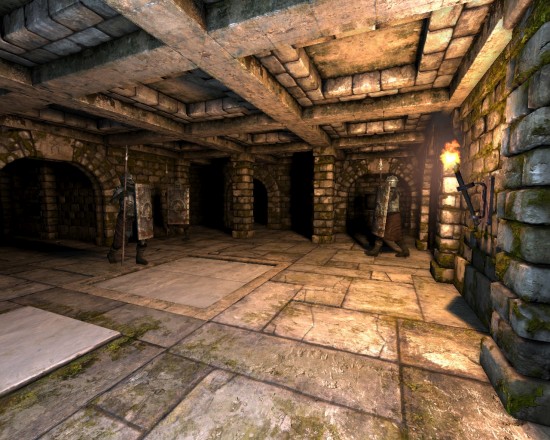 This is one of those times you want to get out of the room as fast as possible.

For those unfamiliar with Grimrock, it’s a call back to the many dungeon-crawl RPGs of two decades past. Staying faithful to its roots, Grimrock is a grid-based trek through the deep dark heart of Mount Grimrock’s feared dungeon. In a world dominated by flashy, explodey RPGs like Mass Effect and Skyrim, the stripping of features and elements of a game may seem like suicide, but honestly I’d champion Grimrock alongside AAA RPGs any day of the week. Where it lacks open, freeform, and emergent (pronounced ‘bugs’) gameplay, it excels in being tight, well-refined, and well-tuned. The game chose quality over quantity, so all its features feel like they had deep thought put into them and everything is intentional.

Basic gameplay sees the player taking control of a party of four prisoners cast into Mount Grimrock, each represented by their portraits in the bottom of the screen. The game allows players to create their own party to play with, or offers up a default party to jump in with. Players drive their party from a first-person perspective, though the view is locked to their facing unless actively looking around. This is due to the mouse-driven interface. Actions are performed by clicking on the characters or their weapons, and objects in the environment. The interaction with the environment is also one of the most impressive things the game offers. Dragging keys to keyholes, pulling on chains and levers, and carefully placing items to weigh down floor plates, are all nice touches, but it’s the small touch of hunting down hidden switches and buttons that’s the icing on the cake. There are a few hotkeys, primarily menu items, but most everything except movement is done by the mouse, including all character attacks.

This is actually one of the easiest switches to find.

The combat itself is simultaneously one of the most satisfying and frustrating aspects of Grimrock. With the exception of spell casting attacking is a simple matter of right-clicking a party member’s weapon. Spells are cast by picking the right combination of runes and hitting a cast button, something easier said than done in the middle of combat. For all the frantic mouse movement, combat is rarely complicated by controls. The only issues I had with controls in combat were the many times I frantically confused the turn and sidestep keys and ended up facing the wrong direction or walking off into something I didn’t want to. Other things like trying to access something in your inventory or doing something complex like mixing potions are also difficult in a fight, but that’s not the best time to be attempting such feats anyway. Real complications only come when you’re faced with an environment favoring the enemy or have to fight multiple enemies. Any time you’re faced with two or more enemies a regular fight turns in to a challenge, more so when trying not to back yourself into a corner. The fact that the game plays in real-time makes that even more difficult. However, the fact that the game plays in real-time is also what makes the combat satisfying, and even the most challenging enemies a simple task with proper management. Given four squares minimum you can easily kill almost any monster the game throws at you, taking minimal damage if any. This above all others is a saving grace in a game that can often by maddeningly difficult.

Like the games of old it so well emulates, Grimrock can be like a honey badger and just not [care – Ed.]. Save the first two levels or so where the mechanics are being introduced, the game is often merciless in its attempts to kill you, later levels stacking the odds heavily against you with tricks like filling a maze with respawning monsters or forcing combat in a room or hall the enemy has an advantage in. Ambushes are constant through the game and will always test your party’s resolve and abilities. While always having the ability to save anywhere, a post-launch patch added the ability to quicksave, lessening the game’s frustration. Sadly even with quicksaving the game has moments so aggravatingly difficult I was forced to quit and restart after a brief break, usually conquering whatever challenged me on the first attempt. Even then the game is jarring and unforgiving upon death, showing you a giant “Game Over” text you cannot skip before booting you to the front menu instead of letting you load. Despite being frustrating in terms of gameplay, it can’t be faulted for breaking character when your party of lowly prisoners is running through an infamously dangerous dungeon.

At the start of this fight my party was at full health.

At the heart of Grimrock lies a story that is actually surprisingly deep considering the initial premise of being prisoners dumped into a hole at the top of a mountain. Though most of the storytelling is done through a series of notes found lying around that are easy to miss, the story they tell is a fascinating one that mirrors your very own descent into the mountain. It could be said that the main story is that of your party of prisoners simply exploring their way through the dungeon and stumbling across the mysteries hiding behind its walls. Often the notes I found echoed thoughts that had naturally sprung in to my head while I was playing, mentioning the tremors shaking the mountain I had just found, or the fact that whoever left them was also disappointed when stumbling upon an empty room. The exposition has a very J.J. Abrams feel to the way that barely anything is explained to you, instead asking you to find out what’s around the next corner for yourself. The curiosity of finding out about things much bigger than your party keeps pushing the urge to explore deeper into the dungeon and its mystery. In fact, the only detriment to the story would be that the ending and the end boss are both so ridiculous it’s akin to ending an epic like The Lord of the Rings with a knock knock joke. I’ve put in hours of thought and I still can’t decide if the ending was tongue-in-cheek or simply a very poorly executed plot.

Barring that one embarrassing exception the game has few faults. It looks fantastic (and why shouldn’t it, rendering a grid-based underground dungeon isn’t very demanding) and it’s a testament that the game doesn’t get visually old after crawling over tile after tile after tile of the same area. From beginning to end it was always a treat to look at. The enemies were visually varied and there were a lot more than I initially believed, all interesting to see and fight. Low light and a more available polygon budget kept all the creatures looking fantastic up until their last breaths. The audio was also a high point, delivering a spooky atmosphere that pervaded through every rock in the dungeon and left me wary of taking another step. Overall gloomy sounds  and distant noises made it impossible to press on without some air of caution. Whenever the mountain shook it felt and sounded perfect, as if I was trapped underground and everything around me was violently trying to rip itself apart before settling back down to continue its eternity of uneasy unrest. 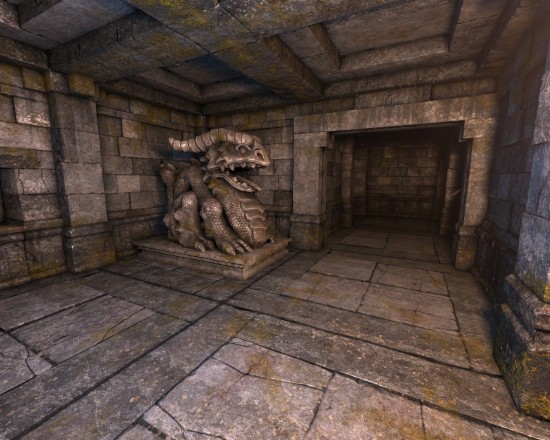 Grimrock is full of mysteries.

A mention should probably be thrown towards the obvious intention of mod support. Even on the initial launch version of the game you are asked to select the dungeon you want to play, ‘Grimrock’ currently being the only playable one. Hopefully soon Almost Human will have mod tools out for aspiring dungeon creators to make new mazes and for players to explore, keeping the game fresh.

Through my 17 hour journey inside Mount Grimrock, I experience elation, dread, and adrenaline rushes that compare to any big open RPG. It proves beyond doubt that a huge world isn’t required for an immersive RPG to feel like you are somewhere, and to grant a feeling of exploration. While Skyrim took on a generic overworld at times, Legend of Grimrock‘s every tile has been thought out and placed perfectly to plan. There were times where I may not have agreed with that plan, but even still I followed it through to the questionable end and enjoyed the entire time I spent in that dark, dank, desolate hole in the ground.