No Comments on Rocksteady’s next Batman Game Revealed: Arkham Knight 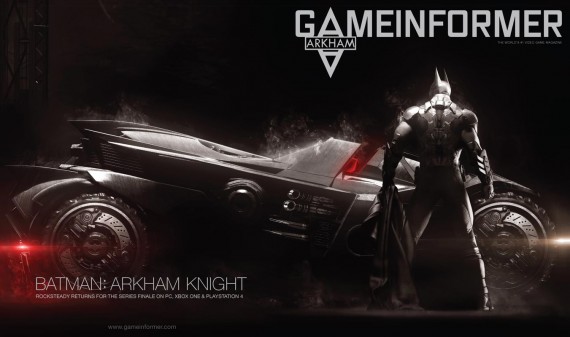 Game Informer has revealed their April cover and the Dark Knight is in tow. Rocksteady’s latest Batman opus is titled Batman: Arkham Knight and will be set in a much larger, more open Gotham; complete with Batmobile access. The game will take place one year after the events of Arkham City and will focus to end the story arc created within the Rocksteady universe. Scarecrow seems to play the main villain this time around, but as we know with previous entries, that may not be the way it plays out. The game will be released this year, which is a bit early after Arkham Origins released last fall, but Rocksteady has had since late 2011 to plan and produce an epic final chapter. The game will be out on the PlayStation 4, Xbox One, and PC. Do you notice something missing? No Xbox 360 or PlayStation 3 release. The other elephant in the room is no Wii U release as well which is in the same generation as the Xbox One and PlayStation 4. Though the upswing with this being on the more powerhouse consoles, and not cross generation, is that we may have a true next gen game on our hands. Once I find out more details like voice actors, composers, plot, and gameplay; I will pass that information along. The above picture is from the April issue of Game Informer and is quite lovely, may make it my wallpaper. The official video is below, enjoy!