To coincide with our interview with Björn Pankratz, Project Director at Piranha Bytes, our friends at Koch Media have given us 5 Xbox and PS3 promo copies of Risen 2: Dark Waters to giveaway!

Now you’ve earned command of your very own pirate ship, the question is, what are you going to call her? All you have to do is tell us what you would call your pirate ship in the comments section below. Winners will be announced on Wednesday 31st October. Won a prize from us before? No problem! You can play and win as many times as you like! To qualify for the contest do the following:

1. Register for an account (if you’ve already done so go to step 2)

3. Tell us your pirate ship name and your preferred platform, Xbox or PS3 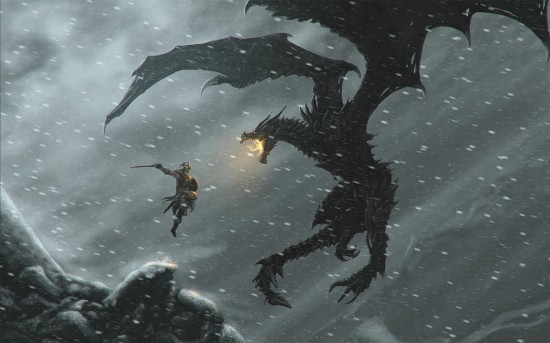 The new Skyrim DLC is coming soon.  Are you ready?  Have you said goodbye to your loved ones?  Because if you haven’t you will soon.  The new DLC for Skyrim ‘Dawnguard’ comes out on June 26th.  That being said Xbox 360 users will be getting first dibs.  PC and PS3 players will sadly have to wait for a later date.

Dawnguard is the first add-on in the Elder Scrolls series, Skyrim, players are asked to join the vampire hunters called Dawnguard or accept the Vampire Lord  Hakron’s invitation to become a vampire and take out the sun.  Those deciding to join the Dawnguard will be granted a slow but powerful Crossbow.

There are some other key features that will be included with the DLC such as:

– The ability to do combat on horseback

– Ability to customize Dragonbone weaponse by collecting Dragonbone resources throughout the players Journey.  The player can craft swords, bows, daggers, axes, and greatswords.

– Werewolf skill tree which includes Savage Feeding, Totem of the Moon, Animal Vigor,  and much more.

The expansion sounds pretty indepth and adds considerable content and customizability.  I’m sure to be purchasing it when it comes out and sinking yet another unfathomable amount of time into the world of Skryim.  Who else will be picking this up when it comes out?

4 Comments on Star Wars: The Old Republic coming to Xbox?

Microsoft has sent mixed messages about bringing massively multiplayer role-playing games to the Xbox 360. Today bioware has shot down the rumors the the much famed MMO will be coming to consoles.  The developer in a interview said “Star Wars: The Old Republic is currently being developed for the personal computer (PC) using the Microsoft Windows operating system. While we recognize that there are other operating systems and platforms available for games today, our development is specific to the personal computer using the Windows operating system at this time.”  After the release of Champions online on the Xbox360 console gamers have been wondering what the next MMO on consoles would be????

No Comments on Top 20 Game Sales

Game Informer released in their April issue the top 20 sales in the gaming world; these are stats/sales from January 2010.  The top titles are surprising to me, is the Wii really this popular?

Geez, of all the negative thoughts I have about Nintendo and their place in the industry, they just shut me up with taking ½ of the Top 20 list.  Still would never trade in my PC or 360 for a Wii : )

GameCrush, Game With a Girl for Money?

4 Comments on GameCrush, Game With a Girl for Money?

All ppl that have little hope of actually having a real relationship, now is ur chance to get it on and destroy a girl in a fsp

.  But if they own u, u should live the rest of ur days in shame, lol, jk.  I wrote about it at AirborneGamer and thought it was interesting enough to give it a new look here.  This will run u about $50 bucks an hour (8.25 per 10 minutes) and will allow gamers to play  head to head or co-op with a “willing” female.  Now for the 360 and said to be released for the PSN in the future, this will prove to all of us doubters once again, not matter how “far fetched” an idea may seem, sex sells.  Just don’t go breaking the Xbox LIVE Online Policy now…

The Real Stimulus Package for ppl that are not Bank Dick CEO’s.  No matter ur feeling about this franchise, or the “special” AI enemies have in the campaign (walking in open to get shot) or any of the Infinity Ward, Activision BS, u cannot deny the great success of this game.  [http://www.youtube.com/watch?v=MS0A3NgyJBc]

This sums it up:

“Activision has announced that two downloadable map packs will be released for Modern Warfare 2. At E3 2009, Microsoft stated that these map packs would first be made available for the Xbox 360 via Xbox Live before they would be released for other platforms. Robert Bowling has stated that the community response to the game and the first two downloadable map packs would be used in designing other potential map packs. The first map pack, the “Stimulus Package”, is set to release on March 30, 2010 for Xbox Live at a cost of 1200 MSP. It will then be available for the PlayStation 3 and PC later on in the year. The pack contains five maps: reincarnations of the Crash and Overgrown maps from Call of Duty 4, and three new maps: Bailout, a multi-level apartment complex; Storm, an industrial park littered with heavy machinery; and Salvage, an abandoned car junkyard in the middle of the snow.”

*thanks again for that brilliant quote from everyone’s favorite online encyclopedia.

Bad Company 2 to get first DLC on March 30

BC2 will be getting it’s first new map DLC on march 30.  The “VIP Map Pack” for BC2 will be available for free to those who bought the game new, and will give players the ability to play Arica Harbor in Conquest mode, as well as Laguna Presa in Rush mode. The DLC will also be released simultaneously on all platforms, unlike Modern Warfare 2’s DLC packages which usually hit the Xbox 360 before the PC. I’m fairly excited that they are going to provide the content free to those who purchased the game.  I’m also glad that the DLC will be simultaniously released on all platforms.

There is a new map pack coming to Xbox live March 30.  This should be a nice change of pace after playin the same maps over and over again.  Details on these maps are coming we will keep you updated.

2 Comments on **New** Aliens vs. Predator

Well let’s see, the guys that worked on the original PC version of this series back in 1999 have had a little time to think how they would like the love of their life to look and feel like.  I sure hope they hit the mark with this one.  This will come out on the 360, PS3 and the PC (thank god, wish companies would stop shortchanging the PC, for f*** sake, it’s the only platform that enthusiasts can actually get more outta the experience, graphics, game play, control).  Don’t get me wrong the 360 and PS3 are sweet, but even on my 50’’ flat panel, playing on my PC just seems like a more compelling experience.  FYI seems like the new Dead Space is not planned to be release on the PC, which pisses me off.  More on that soon.

This Aliens vs. Predator looks bas ass.  I wanna be scared and piss myself during game play, and I have a feelin this one will bring the hits.  There will be 3 different campaigns, playing as the Aliens, Predator, and the Colonial Marines, cool.  Lets just say this, I’m looking forward, and there’s not enough time to play all these sweet games that are coming out, uhhh and this one came out yesterday ; )

The game came out 2 days ago, and I was planning to write something on it earlier but just got a 360 (always have been a PC gamer) and had to hook that baby up to my pre-run HDMI cable and try to beat Halo 3 (now 75% through, I have to work too u know).  So although I am excited to have finally gotten a 360, I do realize there are some sweet games coming out this month and for sure this year.  Next Tuesday the 16th Aliens vs. Predator Requiem is coming out, and it looks like a kick ass game too.  It has some of the same developers from the 1st Aliens vs. Predator, so they have had the vision from this game and how it should have looked back in the day.  Back to Rapture we go.

Umm, question.  Was the 1st Bioshock awesome?  Were the creatures in Rapture freaky and fun to kill?  Was Rapture in itself an awesome and fun city to kill your way through?  Was it not sweet to get a plasmid upgrade and be able to wield an abnormal type super power in one hand and a weapon in the other?  And the answer to all these questions is…yes.  So how much cooler would it be to do all this in a refined world and environment where you actually play as a Big Daddy?  Ohhhh, sounds like a winner. Defiantly check this one out if you’re into FPS’s, and really, who’s not?