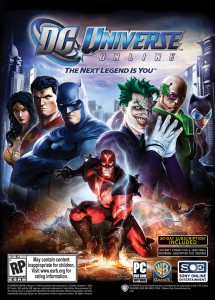 Well DC Universe Online came out earlier this week and my inner comic geek couldn’t pass up a chance to wash away the bad taste of City of Heroes. So I bought a copy for my PS3 and I am actually pleased thus far. Now keep in mind I have not gone through all the content, I am not level capped and I only have one toon so far. Like the title says these are my initial thoughts.

Ok lets take it from the start, character creation. The creation process is really simple and straight forward. You can start from scratch and completely customize a hero or villian, or you can start with a template of an already known hero or villian. From there you select a couple of different powers and items. You pick a movement ability, a fighting ability and weapon. It works like this: I chose super speed for movement, fire as a power and my hands as the weapon. Basically I am a speedster with the ability to shoot fire from my hands. Now they are many other combinations to go with such as flight and acrobatics for movement. Ice, nature, sorcery, and martial arts for abilities and guns, swords, staffs, and bows for weapons. Each with their own role for use (example: Nature powers are mostly healing and support powers.) Now after you get them looking cool with sweet powers and that badass hammer for a weapon, you get to choose a mentor. Since I played the hero side I got to choose from Superman (genetic powers), Wonder Woman (Nature and World powers), or Batman (gadgets and technology). Since I picked super speed, I went with Superman. As your mentor they act sort of like a quest guide/giver. They contact you about missions and help you from time to time. After your character is finished your on to start your superhero story. 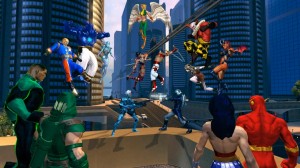 Now I am only level 6 out of a level 30 cap. I am only about 3 hours into the game and it’s a fun game. It plays more like a 3rd person hack and slash then a typical MMO. There is no auto attack. If you stop hitting buttons, you stop fighting. There are no cooldowns on abilities but you do have a mana-esk bar which your abilites use. So you can spam your favorite attack but will run out of power quick. I can’t imagine trying to play this game with a keyboard and mouse. It really seems to cater to the controller wielding player. The action is pretty fast paced and the environment is not short on enemies. Every street corner has another mission and baddies waiting for you. 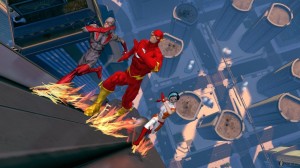 Will DCU be the next WoW killer? No. Will DCU stand the test of time? Probably not. Is DCU a fun and not so serious outlet for MMO players? Very much so. This game is not for everyone. The hardcore MMO players who’s job in life is to get all the shiney purples and have the highest gearscore will laugh at this game and say it’s kids stuff. Well why are you reading this? Don’t you have a raid in like 5 mins? Let me know when you find a girl who is impressed you got level 85 in less than a day you chinese gold farming whore……..Sorry…….struck a nerve…….DC Universe…….. right. It is simply a fun alternative to the usual MMO that we all have become accustomed to. The fact that it is DC just adds to the lore because you now get to fight along side your favorite heros. I have already had missions with Superman and The Flash. This game is for the laid back, causal gamer. So far so good.

Sony Online Entertainment annouced today that DC Universe will be pushed back to early 2011. Here is their statement below.

“SOE is dedicated to delivering the highest quality game experiences possible,” says John Smedley, President of Sony Online Entertainment. “‘DC Universe Online’ is the first game of its kind, and a truly massive undertaking — the first action MMO set in the DC Universe, the first MMO on the PlayStation 3, and the first time the entire DC Universe will be accessible to the millions of fans who are eagerly anticipating its release. As the game heads into external beta testing, this extra time will allow us to address community feedback in a meaningful way. When we get deeper into external beta, we’ll be able to share more information regarding the new launch date.”

SOE has also revealed new details regarding the beta program. Players with VIP key cards and those having registered at the DCUO website will receive access on a priority basis starting as early as next week. As an added thank you, everyone that has already pre-ordered the game, and those who do so by November 15, 2010, are assured access to beta by November 30 (North America only).

Anyone pre-ordering the game after November 15 will gain beta access one week prior to the launch date and will be able to participate in the special beta ending event entitled Battle of the Legends with the rest of the beta participants. As an additional bonus, all beta participants will be recognized post release with a special emblem for their character when the game goes live.  Beginning October 7, 2010, instructions on how to qualify and receive your pre-order beta key, visit: www.dcuniverseonline.com/betakey.

Those wishing to register for beta without pre-ordering have until 11:59pm PST tonight. This is a general queue and does not assure access.

Lastly, due to overwhelming demand from the community, SOE is pleased to announce that a Collector’s Edition for the PlayStation 3 will also be released (North America only), which includes the same items contained in the PC version announced earlier this year – the DCUO Batman statue, the limited edition Art of DC Universe Online art book, the DCUO Legends Issue #0 comic book with a Jim Lee variant cover, the DCUO Prestige comic presentation of the DCUO back-story and the limited edition Jim Lee-drawn poster Version of the Issue #0 comic book variant cover.