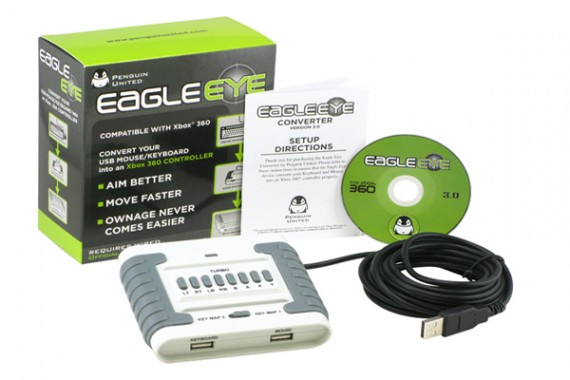 Old habits die hard and one hardest ones for me to attempt to ditch in an attempt to play with some of my XBL brethren was the Keyboard and Mouse setup that I’ve become accustomed to on the PC over the past 17 years.

Some of you may be asking “Why would you lower yourself to playing games like Battlefield 3 on a console when you can play it on a PC at five times the visuals and speed?” the answer to that question is… I have friends who refuse to convert.  So in attempt to keep those friendships intact I’ve purchased games that I normally wouldn’t purchase on systems I normally wouldn’t play.  Primarily Battlefield 3(which I love) and Call of Duty: Black Ops II (which I can’t stand).

Obviously my biggest complaint with consoles is the lack of KB/M support and forcing me to play with, what I consider to be, an inferior control interface.  I gave it a good attempt on Battlefield 3 and the best scores, on rush, that I could come up with where 5/18 or around that on a fairly consistent basis and I would place last if not close to last every other game.  I gave this a go for about a month before I finally got fed up and started to look for a solution that would allow my old school gaming habits to function on ‘modern’ gaming consoles.

The solution came in the form of Penguin United’s Eagle-Eye Keyboard and Mouse Converter.  I decided to pick this up after I looked around the net for a solution and honestly when one of my friends *Xbox fantatic* told me to buy it.

So is it any good?  In short… yes but it does have some drawbacks.  Let’s start with the negatives:

This was confusing to configure even for an experienced System Architect like myself.  I eventually figured it out but it did take me about 6 hours from the moment I bought it to the point where I was playing.  There were several things about it that were hard to figure out but once I got it was smooth sailing from then one.  The biggest complaints I had were this:

You have to have a wired Xbox *official* controller otherwise you won’t be able to get the EagleEye to sync with your Xbox.  Yes you have to plug in the wired controller into your converter every time you start your xbox and connect it.  Connecting it, from what I can deduce, allows it to steal the licensing from the controller and emulate it on the controller.  Once it’s connected you’ll be fine until the next time you turn off your Xbox 360.

Sensitivity can be annoying.  I’m used to high sensitivity on the PC and on the console I was forced to pump the sensitivity all the way up to get it to the point where I could be competitive in games.  It’s still not what I would like but it’s far better than the alternative.

This complaint is specific to Battlefield 3 so I cannot speak to other games as the only two games I’ve played with this are Call of Duty: Black Ops II and Battlefield 3.  It’s hard to use any vehicles outside of the tank and even then it can be a challenge as it is VERY slow to turn turrets.  It’s hard to explain until you’ve used it but once you have you’ll understand.  Don’t even try flying a jet or a helicopter.

Finally the last complaint I had is having the right hardware.  This device only functions with specific hardware.  Do yourself a favor and do your research before you purchase this and purchase it with the proper Keyboard and Mouse combo.  I’ll do an article later on showing what I did to make it work.

While there are… what some would consider a lot of negatives, there are a good number of positives as well, especially once you get everything configured the way you like it.

The biggest question is will this making playing an FPS on a console better?  Yes it will and by a good margin.  Yes graphics will still suck like they always do on consoles but at least from a controls perspective things will be much better.  I went from being 5/18 and near last on the team playing rush to going 35/5 on a fairly consistent basis and getting MVP 1 -3.  You can tell right off the bat that you have a pretty big advantage from other players by just the nature of controls.  Having said all that BF3 and COD: BO II don’t play the same on Xbox as they do on PC, they are much slower.

EagleEye comes with some pretty slick controller software.  It allows you to fully customize your keys on your controller to their keyboard and mouse equivalents.  Yes there are some that can’t translate over quite the way I’d like but it’s still much better than using a controller.  The biggest part is just memorizing what those are as you’ll still have to memorize what keys you’ve mapped to what controller buttons.  You’ll need to know these for navigating menus and such.  Once you’ve memorized those it’s smooth as butter. 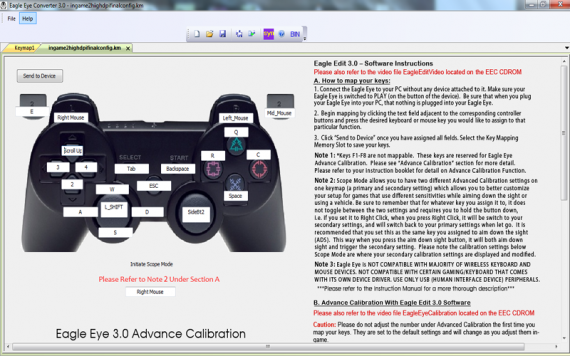 Would I recommend this?  Yes… once you get past some of the quirks with go along with this product it’s a pretty slick product.  When you finally get it functioning it works really well aside from having to initialize it every time I start my Xbox.  Having said that it’s a price I’ll gladly pay to not have to deal with clumsy controls.  While this product does need some improvements in the form of ease of use it still gets TGB’s stamp of approval.  Anyone else had experience with this product?  What did you think?

You can check out Penguin Uniteds site here.  If you’d like to purchase it you can buy it at Amazon.com here. You can also purchase a PS3 version.