Medal of Honor: EA SERVERS ARE NOT CURRENTLY AVAILABLE

15 Comments on Medal of Honor: EA SERVERS ARE NOT CURRENTLY AVAILABLE

Due to the rather strong suggestions from some of my friends on Xbox Live I decided to purchse a copy Medal of Honor for the Xbox 360.  I had the title for maybe two weeks before I ran into this little gem of an error.  I should of expected this coming from EA.  This error drove me insane for about 3 days before I finally found the solution to it.  This error can be solved on any EA games that require you to play through the EA servers.  The following steps should help resolve your issue.  After each step launch Medal of Honor and try to login to multi-player.

1.  Go to My Xbox -> System Settings -> Memory and press Y and press clear cache.  You can read the offical tutorial here.

3.  Press the Xbox Button and go to Account Management -> Download History -> Medal of Honor and redownload the license.

I went through a lot of pain and agony to figure this one out.  I hope this tutorial is helpful to someone out there. 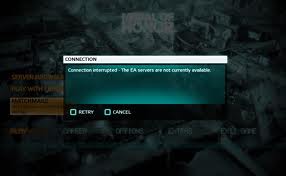 After taking a lot of heat for the games content, Medal of Honor has made a change. The new Medal of Honor will not have Taliban forces in it anymore. The whole ordeal started when it was announced that you would be able to fight and play as Taliban forces. The U.S. Military then decided to pull all Medal of Honor games off the shelves on all U.S bases. Then after a month of flack, Greg Goodrich (executive producer on the game) decided to remove the Taliban from the game and rename them to “opposing forces”.  Goodrich posted a statement on the Medal of Honor website about the issue:

In the past few months, we have received feedback from all over the world regarding the multiplayer portion of Medal of Honor. We’ve received notes from gamers, active military, and friends and family of servicemen and women currently deployed overseas. The majority of this feedback has been overwhelmingly positive. For this, the Medal of Honor team is deeply appreciative.

However, we have also received feedback from friends and families of fallen soldiers who have expressed concern over the inclusion of the Taliban in the multiplayer portion of our game. This is a very important voice to the Medal of Honor team. This is a voice that has earned the right to be listened to. It is a voice that we care deeply about. Because of this, and because the heartbeat of Medal of Honor has always resided in the reverence for American and Allied soldiers, we have decided to rename the opposing team in Medal of Honor multiplayer from Taliban to Opposing Force.

While this change should not directly affect gamers, as it does not fundamentally alter the gameplay, we are making this change for the men and women serving in the military and for the families of those who have paid the ultimate sacrifice – this franchise will never willfully disrespect, intentionally or otherwise, your memory and service.

To all who serve – we appreciate you, we thank you, and we do not take you for granted. And to the Soldiers, Sailors, Airmen and Marines currently serving overseas, stay safe and come home soon.

Now will this appease the U.S. Military? Who knows? No one made a fuss about Call of Duty: World at War when you were able to fight Japanese and German soldiers. I guess fighting the Taliban in a video game will be ok in 50 years or so. 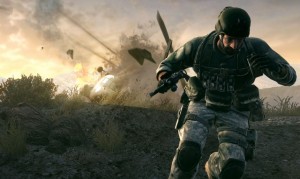 So I got a chance to play the beta for Medal of Honor on PS3 last night and thought I would share my thoughts on it.

First off as soon as you jump into a game the first thing you will notice (or at least I did) is the graphics and detail. Yes there are some graphical bugs, but keep in mind IT IS A BETA. It is a non-finished product. With that aside the game is beautiful. I am willing to go out on a limb and say MOH maybe the best looking FPS to date. Everything is very smooth and its reaction to explosions and gunfire are spot on. Now as you play, you get to choose from 3 base classes. Operator, Spec Ops, and a Sniper. Each class has a different main weapon and secondary weapon. When you change sides the names change but the classes are the same. Only difference is instead of a M16 you may use an AK-47. There is a leveling system very much similar to the Battlefield: Bad Company games. This is due to the fact that DICE (responsible for Bad Companys multiplayer) is also heading the multiplayer for MOH. There are also killstreak rewards like in Call of Duty, but when you unlock your reward, you are given the choice of either a mortar strike or call in a UAV instead of just one at a time. As you level just like in Bad Company, you will unlock scopes, guns, and things like extra mags. The map layout is the usual FPS standard. Two levels, high and low. Open areas mixed with tight close quarters. Really the only issue I had with it was whenever I died there was a small lag spike, then my guy would fall over. My buddy I was playing with also encountered this problem, but again it is a beta. With a few little glitches here and there I don’t see any reason why this can’t put up a good fight agaisnt Call of Duty this holiday season. Medal of Honor has good promise to become the new standard in first person shooters.

Medal of Honor is set to hit shelves October 12