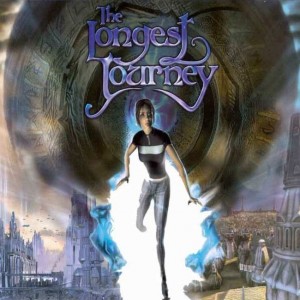 I’ve played a good number of adventure games.  I’ve played through all of the Myst, Syberia and Schizm series just to name a few.  I managed however to never play this jemo of a game called “The Longest Journey”.  To give you all a heads up this game is old by all standards.  Released in 2000 the game sports a max resolution of 800 x 600 and that is not changeable.  This isn’t to say the game looks bad because it doesn’t for the most part but you will noticed it on the 3d rendered characters.  I am currently playing on a 28″ monitor so when I first started the game I about gagged but after playing awhile I tended not to notice the bad graphics.  I did look around the net for a graphics mod for the game and I could not find one.  If I ever do find one I will be sure to post something about it.

I’ve always said I’m a sucker for a good story and from start to finish TLJ does not disappoint.  You could call this game “The Longest Story” and you would be right on the mark.  That being said if you are one of those people that doesn’t like long dialogue scenes then I will tell you up front that this game will bore you to death.  The story picks up in April Ryans apartment.  The game starts off in what seems like a normal world but things quickly start developing and you’ll find yourself traveling to many exotic locations ranging jungles to space stations this game literally takes you everywhere.

The graphics in the game looked great, 10 years ago, now not so much.  This being said this should NOT stop you from playing the game.  The scenes within the game are all pre rendered and animations put within them to liven the world.  Your game character and all NPC’s within the game are rendered in real-time 3d.  While the pre rendered scenes actually look pretty good for being 10 years old you will notice the pixelated characters.  I did find however that after playing the game for an hour I tended not to notice this.  When playing a game as old as this, especially one I’ve never played, I try to keep of the mindset of “what would I have thought of this had I got it at release”.

The sound in the game is top notch.  The biggest piece that stood out to me while playing this game was the voice acting.  It was extremely well done.  With the exception of the Myst titles I’ve never heard such good voice acting.  I found the dialogue very interesting and enthralling.  There are times when it is very serious and also very light hearted.  There were few points within the game where I felt the wording used during the scenes was a little over done or even a little explicit compared to the rest of the game.  The scenes involving Flipper were the most obscene.  The game overall was really well done.

This title may turn off a lot of gamers because of it’s inherant gameplay type.  This is NOT an action game.  This is a puzzle solving and story game through and through.  If you are into this type of game you will love it however if you are expecting an explosion packed, gun running, twitch based game you are going to be sorely disappointed.  TLJ is a very well paced game starting you off with some simple puzzles to get the story moving and then progressing to more complex one.  The puzzles were unfortunately one of my biggest gripes with this game.  At times during the game if you don’t do things in a certain order then you can’t progress further in the game.  This can leave you confused and stuck at several spots during the game because you have no idea of what you need to do.   Some of the puzzles within the game are extremely  complex and I found myself thinking “I would never of thought of this” in several cases.  I am glad to say however the majority of puzzles within the game can be figured out without any outside help.

Overall I would have to give this game a 90/100 the intriguing story, believable characters and amazing sound really make for a one of a kind experience.  Those of you who have played through games such as Syberia, Schizm, Beyond Atlantis and Myst will love this game.  There is a lot for you here including a great story and a ton of puzzles to solve.  Aside from the small gripes I listed above with crazy hard puzzles, some questionable dialogue and some overly complex puzzles this game is a blast.  I recommend everyone get this game for their collection.  It can be had at steam with it’s expansion for 25 dollars.  You can get it here.