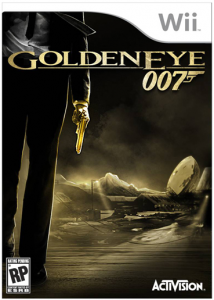 It appears bond is set to return in a remake of ever popular Goldeneye 64.   This is great news indeed for those waiting for a new bond game and those waiting for a shooter for the WII.   The plethora of James Bond games since Goldeneye 64 have been disappointing at best so one might wonder what one should expect for this WII exclusive release

Unlike the it’s predecessor it will not be developed by Rare and Nintendo instead it is being developed by a Eurocom and Activision.  Having Activision involved in the mix may scare some people but this shouldn’t automatically discredit the game.  Activison and Eurocom can and do make good games.

Multiplayer is presented in four-player splitscreen or eight-player online, with an experience points system that unlocks perks and this tends to be consistent with how Activison creates multiplayer games now days. Maps will be drawn from familiar locations, but the layouts will be changed from the way they were in the Nintendo 64 version.  You will be able to use both the motion sensor to play the game or you can play the old fashioned way.

This remake has me intrigued but I have the uneasy feeling that this game is going to be a simple rehash of the original  with a few changes that make it different enough justify it but similar enough that it won’t require much in the way of creative process.  However, I have been wrong before and I hope I am in this case as Goldeneye 64 and the James Bond Franchise are one of my old time favorites.  Here’s to hoping that Goldeneye WII is a remake the does the original Justice.