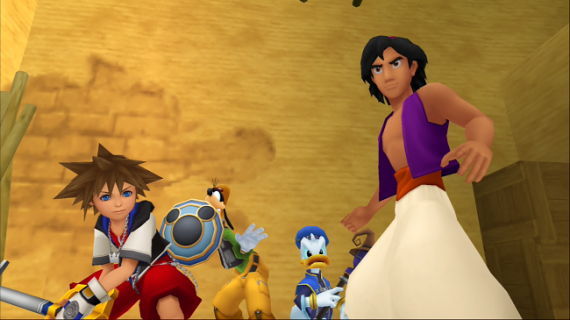 When looking over my notes for this game, I came to the decision to review this title as a package, not a new standalone game. The original Kingdom Hearts was released over 10 years ago, a little late to review a game based on its merits as a new title, despite my first play through of the title, though I am no stranger to the franchise. I do want to, however, go over the changes made in this HD collection and will judge the title based on what it is, an HD collection. Over 40+ hours with the title, I had ups, downs, and a new bar at which to set HD collections at.

Kingdom Hearts 1.5 HD Remix is comprised of three titles, Kingdom Hearts: Final Remix (was a Japan exclusive), Kingdom Hearts Re: Chain of Memories, and 358/2 Days (pronounced 358 over 2 Days). The first two titles are in their entirety, but 358/2 Days is just re-mastered cut scenes with no gameplay to speak of, which was cut due to having to take the time to rebuild the game( it was a DS exclusive), but there is still plenty of value here for your money. I completed Kingdom Hearts Final Mix, without obtaining every item and did not finish every side quest in about 33 hours. The rest of the time was put into Chain of Memories and watching about an hour’s worth of the videos from 358/2 Days. Let’s break the title down. 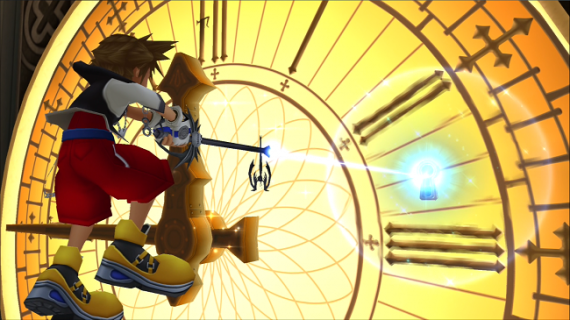 Kingdom Hearts was originally released back in 2002 for the PlayStation 2. It was a critical and commercial success, though it did have some problems. The version that is included in this collection is the Japanese exclusive “Final Mix”. The title follows Sora, Donald, and Goofy on their adventures though original and Disney inspired worlds to stop Ansem and defeat the Heartless. According to the games director, Tetsuya Nomura, most of the original game assets were lost over time, so most of this title has been rebuilt. The biggest changes have been to the camera and to the visuals. Despite some weird mouth textures here and there, this has set the bar for visuals in an HD collection. The games art directions pops off the screen in great 1080p resolution and could easily surpass some titles that were made more recently. Best of all, unlike some other HD collections the full motion videos have also received the HD treatment, making them a visual treat. The camera system has been reworked from the shoulder buttons in the original game to the right thumb stick to mimic the camera from Kingdom Hearts 2. While this is a great update, the camera can still be erratic and made some jarring movements during combat and other segments. Platforming with the new camera made it more tolerable, but the weird floating physics still kept it a chore. All of the music has been redone with live compositions, instead of the synthetic based tones found in the original. I wish I had a set of headphones for my PlayStation 3, this game would have benefited from a better output than my T.V.’s speakers; the music is fantastic. The original voice work is still there, with performances by Haley Joel Osment, Billy Zane, David Boreanaz, and James Woods. The voice overs are hit or miss in their acting ability, but serve their purpose well. This is the meat and potatoes of the collection and as an HD re-master it is hard to fault. The game is beautiful, sounds great, and plays great. There are some design issues I have with the game, such as the lock-on being iffy at times, and the hunt for what to do next in some levels; but this is things that are a decade old, and are moot at this point. Seeing and hearing how great this title is now in the HD era, was a real treat, gripes aside.

Re: Chain of Memories is a PS2 remake of the Game Boy Advanced title. The game plays differently than other titles in the series, with battles using cards, instead of the typical action command system. Chain of Memories takes place immediately after the first Kingdom Hearts and has Sora and company exploring the Castle of Oblivion. The Castle bases its rooms off of Sora’s memories so expect a lot of recycled environments from the previous title. The card battle system takes some time getting used to, and I still feel I don’t have a well enough grip on its intricacies. The game is much shorter than Kingdom Hearts but is expected to be played through twice, so after two plays, you should clock in around the originals run time. The game is much narrower in its scope and feel, and linear by nature. It is a fun distraction if you are looking for more to do with the 1.5 Remix after you have finished Kingdom Hearts, I would not by the collection just for this title.

358/2 Days has zero gameplay. It is a collection of videos, playing out the story for the DS exclusive title. The collection of videos spans almost 3 hours and while some are better than others, it can feel a bit drawn out and dull at times. It seems like a weird omission to not include new gameplay; this does complete the story line up until Kingdom Hearts 2. As far as the chronological order is concerned, these three titles line up one after another. In the grand scheme of things, if there is to be a Kingdom Hearts 2 HD compilation, any new comers to the series would be caught up to speed with the overall story arch, outside of the PSP prequel, Birth by Sleep. While I am sure the gameplay was cut for the sake of time and money, it is kind of a disappointment that it wasn’t included. The videos were made from the in-game engine and do include the beautiful updated visuals as well as voice over work. There are trophies to unlock with the videos, which was a weird choice, though some maybe grueling for trophy hunters, be prepared to watch a lot of videos. 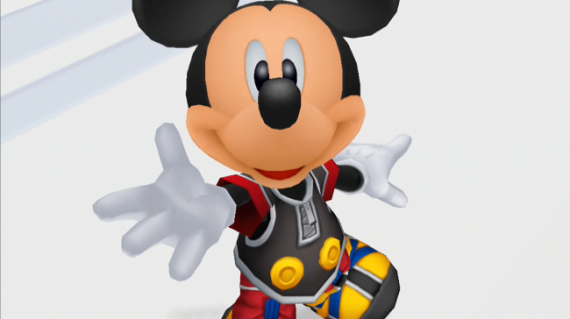 If you are a fan of Square Enix or the Kingdom Heart series, then you already have the collection. For those looking to get into the series, or something a little lighthearted and different, this is the collection to buy. For $40, you could have received less content, but Square Enix was very generous in this collection. Kingdom Hearts, like I stated above, is the main course of this collection and should be purchased as such. Chain of Memories and 358/2 Days should be treated like DVD extra features, they are good additions, but if you skip them, you are not missing out on much. As a HD collection, it is fantastic. I thought I had seen the pinnacle of these collections with the likes of the ICO, Metal Gear Solid, and Sly Cooper collections, but Square Enix has surpassed these. While the others have included more stable frame rates and higher resolutions, most of Kingdom Hearts Final Mix was rebuilt with this collection in mind. It may be lacking in the amount of games offered versus other collections; the outstanding reworked visuals and audio place this at the top of my HD collection list. The packaging is one other positive going for this collection. I post an article about the art book packaging on Tuesday, and if you are thinking of picking up the title go for the art book case if you can. I love the idea of packaging being an art book, hinting at the ever possibility of games as art. In closing, come for the beautiful Kingdom Hearts Final Mix; though be aware some gameplay elements have not aged particularly well. Chain of Memories and the 358/2 Days theater are after dinner mints that can be taken as you please, or you can ignore altogether. As an HD collection, it sets a new bar for audio and visual re-mastering. I hope Square Enix put this much love into the upcoming Final Fantasy X/X-2 HD Collection.

+ Reworked audio is a treat

+ A great package for new comers to the franchise

+ Despite camera issues and some cheap deaths, the game is still a blast to play

– The reworked camera is a nice addition, but is still awful

– Trophy hunters have to sit through the three hour movie