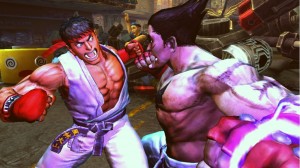 Katsuhiro Harada also added that Namco is developing another version called Tekken X Street Fighter that will be more on the style of the Tekken games, with 3D fighting arenas.

Both games have a ways to go before being released as they are still working on Marvel vs. Capcom 3.

All these games will be for both PS3 and Xbox 360