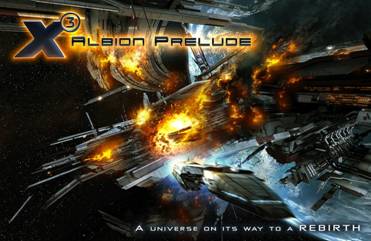 Dec. 15th the X universe turns to full scale war. The conflict of interest between Earth and the inhabitants of the X universe has escalated and will put the player into a war scenario much larger than anything the X Universe has ever seen. War however is only the beginning. Technological breakthroughs will spark an evolution in the economy as highways are built in space creating an economical boost. The highways wont be ready but you can witness them being built and take part in the grasp for power over new self sustaining economies being constructed as corporations hide behind the conflict and use the war as a front to gain power. There will be a shift of political power as the X universe experiences a period of undeniable change.

– A new plot throws you into the power struggle between corporations at a time of war.

– More than 30 new ships and stations

Also worth noting is that your save games from X3: Terran Conflict will not be cross compatible with Albion Prelude.