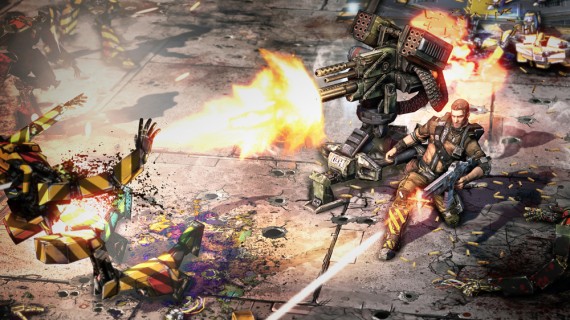 Again I am slipping a bit this week by posting this a day later, so I apologize for that. Let’s get down to what is hitting the Xbox Live Marketplace this week. The huge highlight this week is the final Borderlands 2 DLC, Tiny Tina’s Assault on Dragon Keep. This is touted as the largest expansion to the game, and features new weapons, enemies, and magic for the first time. The DLC makes references to table top games like Dungeons and Dragons, while throwing Borderlands absurd humor into the mix. The DLC will run you 800 MP and is included if you have the season pass. There is quite a sale going on for some Microsoft Studio’s Arcade titles. Here is the list:

I can recommend almost every title on this list outside of Bloodforge, it just really isn’t worth the half off price tag. Limbo should be an instant buy for anyone that has yet to grab the game. Both Toy Soldiers games are great action tower defense games and Cold War add’s some humor with an 80’s flair. Perfect Dark, which I have been playing recently, is not that mediocre launch title, but rather a reworking of the original N64 classic. The game plays exactly the same but with a new coat of paint and a stabilized 60 FPS. Fruit Ninja is a good time if you are looking for something to use with your dust collecting Kinect and you can look like a Power Ranger infront of your T.V., what else do you need. Also hitting this week is the newest Magic: The Gathering, dubbed 2014. While I typically don’t play these, my brother who is an avid Magic player, think this could be the best in the series. Magic 2014 will run you 800 MP. If my sources are correct, the newly announced free titles that are coming in July, Assassin’s Creed 2 and Halo 3, the first of which should be out on the 1st. I believe they are planning two games a month and releasing them on the 1st and 16th of each month. Right now if you are looking for a free game, Fable 3 is still available to download for nothing. While not the best of the series, Fable 3 certainly added some clever ideas and could last you until the next free game is delivered. For everything here and anything that I didn’t cover head over to the Official Xbox page.